The traditional view of islet physiology frames insulin and glucagon as the ‘yin’ and ‘yang’ of islet physiology and ties their actions to high and low glucose, respectively. In reality, pancreatic islet cell activities are much more complicated, and far more interesting. The tuning of alpha and beta cell responses to changes in bloodstream nutrients involves the integration of cellular metabolism with multiple signaling pathways, including Ca2+, cAMP. Our mechanistic understanding of beta cell Ca2+ responses is derived in large part from studies on rodent islets. Studies that have assessed the regulation of Ca2+ directly in human islet cells are 1) more restricted, 2) have mostly focused on beta cells 3) have been largely limited to the Ca2+ response to glucose and GLP-1, and 4) are only starting to assess functional responses in more than a relatively small number of individual beta cells, sometimes alongside alpha cells. However, we know that Ca2+ response of human beta cells differ in key ways from the Ca2+ responses in mouse. Human beta cells have a lower glucose threshold and have shorter Ca2+ bursts spaced further apart compared to mouse beta cells. These notable differences between nutrient-induced Ca2+ responses between mouse and human beta cells are mechanistically poorly understood and warrant careful quantification of Ca2+ responses in human islets. We have developed an approach to assess the Ca2+ responses of a large majority (>90%) of all beta cells in a population without bias using efficient adenoviral delivery of genetically encoded biosensors for Ca2+ and cAMP followed by an optimized imaging strategy to quantify their functional responses across many hundred cells per trace in an unbiased approach. These functional imaging approaches would complement ongoing efforts of detailed human islet functional phenotyping in HPAC, while our fluidics approach would be enhanced by interactions with the CHIB consortium. 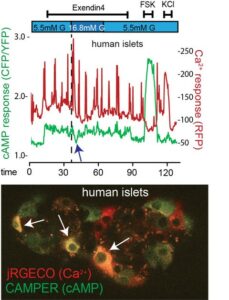