A Stress-Induced Vicious Cycle in the Development of T1D

A vicious cycle of (pre)proinsulin-mediated ER stress, ubiquitin-ligase activation, and disordered Ca2+- handling in pancreatic beta cells. This proposal is submitted in response to a request-for-applications for Discovery of Early Type 1 Diabetes Disease Processes in the Human Pancreas (including the possibility of studies of signaling/processing pathways that are dysregulated in stressed beta cells during the asymptomatic phase of T1D). Our group of three pancreatic beta cell biologists with distinct expertise (Drs. Arvan, Soleimanpour, and Satin) brings forward a novel hypothesis about the initiating beta cell events in T1D, with the realization that these intricacies exceed what any one laboratory could exhaustively study on their own. Specifically, the three collaborating P.I.s propose a chain of beta cell defects that can be initiated and exacerbated by pro- inflammatory stimuli but are then further propagated by a failure of inter-organellar support, including the endoplasmic reticulum (ER) and mitochondria. It is well known that activation of ER stress signaling upon perturbation of ER homeostasis (launched from multiple potential initiators, including proinflammatory cytokines) triggers activation of stress kinases that include (but are not limited to) the ER membrane protein, PERK. New evidence suggests that ER stress kinase activity results in phosphorylation (and thereby activation) of one or more E3 ubiquitin (Ub) ligases residing at ER-mitochondrial contact sites known as MAMs. We posit that ER stress-related E3 Ub-ligase activation stimulates ubiquitylation and proteasomal turnover of a number of MAM resident proteins including the well-recognized mitochondrial substrate, mitofusin-2, but also key components of ER-to-mitochondrial Ca2+ transfer including IP3R1 and others. ER stress-provoked degradation of MAM protein components can be evaluated biochemically and quantitatively by Western blotting; but we go beyond this to examine the functional consequences via measurements of impaired ER-to- mitochondrial Ca2+ transfer. We propose that such calcium imbalance further impairs mitochondrial function including (but not limited to) impaired ATP generation, which exacerbates the perturbation of ER homeostasis with concomitant ER stress. In short, we propose that pro-inflammatory triggers of T1D can initiate a vicious cycle leading to beta cell failure. This hypothesis will be tested in human islets in vitro as well as in an in vivo model involving transplanted human islets. Finally, we propose to probe certain trigger points to break the vicious cycle, in an attempt to rescue beta cell survival and function, with the intention of preventing T1D onset and progression. 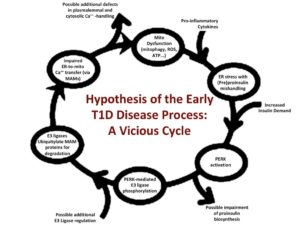