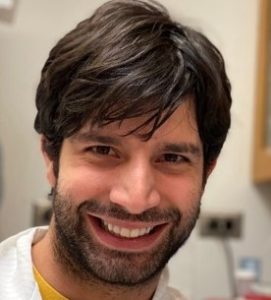 I am originally from Coimbra, a college town in Portugal. I received my bachelor’s degree in biochemistry from the University of Coimbra, Portugal, and my Ph.D. from Harvard University also in biochemistry under the guidance of Dr. Jack L. Strominger and Dr. Chad A. Cowan (Department of Stem Cell and Regenerative Biology and Department of Molecular and Cellular Biology).

Postdoctoral Scholar in the laboratories of Dr. Qizhi Tang (Department of Surgery) and Dr. Jeffrey A. Bluestone (Diabetes Center) at the University of California, San Francisco (UCSF).

I have wanted to be a scientist ever since I can remember. As a little kid, I would often get bruised and hurt playing sports. I remember marveling at the way in which wounds seemed to heal so seamlessly, as if nothing had happened. Fast-forward to high school and it was becoming time to pick a college major. I enjoyed both biology and chemistry, the former for its fascinating phenomena and the latter for its rigor in describing entities. I went to the public library in my hometown of Coimbra, Portugal, quite often. One day, I walked into the college textbook section and opened a biochemistry textbook. The atom-by-atom structure of cellulose left such an impression on me that I picked biochemistry as my college major. I decided to become a researcher to more deeply understand biological systems to rationally improve them and ultimately revolutionize the human condition.

The immune system is usually seen as an army that defends us from infections. However, there are cases where the immune system goes rogue and attacks our own tissues, causing devastating diseases, such as type 1 diabetes. Luckily, there is a subset of immune cells dedicated to suppressing specific immune responses and promoting tissue repair: regulatory T cells (Tregs). I am designing and developing strategies to genetically engineer Tregs to become living drugs to cure type 1 diabetes.

I wake up every day thrilled with the opportunity to tinker with human cells at the genetic level, redirecting their specificity using artificial immune receptors and adding or subtracting genes to fine tune their behavior and function.

I will achieve immune tolerance in type 1 diabetes and other inflammatory disorders.

► What groups are you involved with?

►When not in the lab what are your favorite hobbies/activities?

San Francisco’s beautiful scenery has lent itself well to exploration by biking and running. I was also an assiduous member of the UCSF Fitness and Recreation Center and frequented social dancing and improvisational theater classes in pre-pandemic times. When not in the city, I enjoy immersing myself in different cultures and cuisines at distant locations. I also dabble in cooking; reviews are mixed.

I was part of the Harvard Ballroom Dance Team for three years and competed frequently in both the Latin and the Standard categories. Yet, the highest score my talented partner and I ever attained was in American Cha Cha and Rumba at the Big Apple Dancesport Challenge at Columbia University in New York City. Sometimes victory and success do not come from where we put the most time and effort into.